Donate now to transform a life affected by domestic abuse.

Daisy was just 19 when she met her, Robbie, working in a barber shop in town. He was eight years her senior, charming and quick to spoil her with flowers and gifts. Their relationship developed quickly, and Daisy moved out of her parent’s home into Robbie’s flat.

It was at this point that things began to change. Robbie would meet her from work to walk her home, asking about the guys she’d spoken to that day. He installed a tracking app on her phone and checked her messages. He just wanted to keep her safe. Robbie set up a joint bank account for them, and had her wages paid directly to that. He gave her an allowance of £15 a week to pay her bus fare and buy lunch. Daisy had always spent money like it was going out of fashion; he was helping her take responsibility for money. Robbie took a dislike to Daisy’s best friend Courtney and her friends from college, so she saw them much less. It was time to settle down, he reasoned.

Over time, they began to argue. The things that had made Daisy feel safe made her feel suffocated. She felt low, anxious. Neighbours called the police a couple of times, but the arguments had never progressed beyond shouting and threats – so Daisy sent them away. And to prove she loved him, Daisy agreed have Robbie’s baby. 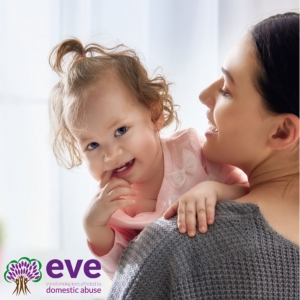 During Daisy’s pregnancy, the abuse and control escalated. After Mia was born, Daisy’s health visitor noticed bruising and put her in touch with eve for support.

Daisy escaped to our refuge, and lived there with Mia for 10 months while she rebuilt her confidence, self-esteem and relationships with her family and friends. She had counselling, support for parenting Mia, took part in group programmes such as Freedom, and received support to secure a job so that she could save a deposit for their own flat.

It’s your support that enables us to be there for women like Daisy.

If you would like to fundraise for eve, please email us for a fundraising pack.