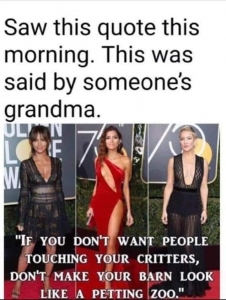 Are you shocked that eve has used this photograph?  I hope you are.  It is offensive in so many ways;

But even more than this is the implication that women are responsible for their own sexual abuse because of what they wear.  This kind of ‘victim blaming’ is not only abhorrent it is indicative of rape culture.

And that is exactly what this photograph does, it says that ‘If a woman dresses in clothes that reveal her body, men are entitled to touch her.  If she doesn’t want to be touched, she should dress more modestly’.

In fact, an exhibition that has toured the world shows the clothing worn by survivors of sexual abuse.  The installation aims to ‘create a tangible response to one of our most pervasive rape culture myths’.   And states that the belief that clothing or what someone what wearing “causes” rape is extremely damaging for survivors.

Outfits displayed included simple jeans and t-shirts, a child’s fairy costume as well as a six-year-old girl’s sundress.  Other outfits include an army uniform, a swimsuit, a man’s jeans and t-shirt, a sari and a prom dress.

But what can we, as ordinary people, do about rape culture?  In Asking for It: The Alarming Rise of Rape Culture — and What We Can Do About It, Kate Harding examines what rape culture is and how society continues to perpetuate it.  She suggests 8 ways that we can make a difference.

Revisit Your Definition Of Rape We should never downplay the severity of rape. Whether the victim knew her rapist, was drunk, fought “hard enough,” etc., doesn’t matter. If a person was forced to have sex against their will, it was rape.

Re-evaluate How You Talk About Women When we call women “sluts,” “whores,” and the like, we villainize them in a way that maintains the idea that a woman’s behaviour or appearance can indicate that “she was asking for it” or “she deserved it.” Again, rape is about a lack of consent, so ‘slut shaming’ takes away from that fact.

Understand That Sexuality Is Up To Individuals How others choose to express their sexuality is not up for judgement. When we prize purity and chastise displays of sexuality, we imply that women who are act flirtatiously, wear revealing clothing, or are sexually active can’t truly be victims. When we do this, we open the door for victim blaming. Rape is: “the violation of another person’s autonomy, the use of another person’s body against their wishes.” That means the rapist is always at fault, never the victim.

Put Yourself In A Victim’s Shoes When a woman is raped, there should never be a discussion about “It wouldn’t have happened if…” No one deserves to have their choice taken away from them, even if they exercised poor judgment. It’s important to remember this and put yourself in victims’ shoes.

Consider How You View Those Accused Of Rape When you hear about a rape, analyse your thought process. If you’re immediately looking to give the accused the benefit of the doubt and placing blame on the accuser, check yourself. We don’t do this for any other crime, and we absolutely shouldn’t do it for rape. Research for the Home Office in 2017 suggests that only 4% of cases of sexual violence reported to the UK police are found or suspected to be false; so it is the victims we should believe.

If You Raise Children, Teach Them Well Work to fight rape culture yourself and pass the lessons along. Raising children who understand the importance of consent, avoid victim blaming, makes a huge impact.

Think Critically About What You See In Pop Culture And The Media Rape culture can be seen and heard across all forms of social media and pop culture. Be aware of its presence, and don’t support those who glorify it.

Speak Up when you hear or see others perpetuating rape culture, try to find the courage to take a stand.

Explain why specific behaviours are harmful and try to engage in meaningful discussions about how society’s view on the issue can impact survivors.

It’s not always easy, but it’s for our loved ones, ourselves, and the hope that together, we can change the statistics.